The fin fish, known as the king of fishes, can live in the depths of the sea. Grows to about 16 feet tall. It is very rarely available. 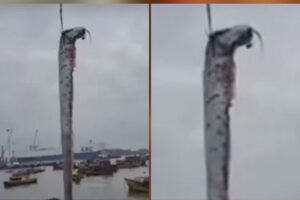 A video of a 16-foot-long fish caught by fishermen in Arica, Chile, in the South American country, has gone viral on the Internet and has garnered a large number of viewers.

The video shows a group of fishermen lifting a 16-foot fin-like fish out of the sea with the help of a crane. Then everyone around takes a picture of it.

According to the fishermen, it is not only the size of the fish that attracts attention but also the superstitions associated with it.

This fish is not commonly available on the surface of the ocean. Known as finfish, it can live in the depths of the sea. They only come to the surface when they are sick, dying or reproducing. It is an ancient belief that if it reaches the surface of the sea, catastrophic events like earthquakes and tsunamis will occur.

Many people on the internet have suggested that the fish may have surfaced due to an undersea earthquake. But there is no scientific evidence for this.

The fin fish, known as the king of fishes, can live in the depths of the sea. Grows to about 16 feet tall. It is very rarely available. There is also a folk legend that it has the power to predict the future.

In 2011, this fish was spotted before the Fukushima earthquake in Japan. Subsequently, many superstitious stories of this spread.

Currently, the video of the caught paddlefish was first shared on the Tidak app and has crossed 10 million views on the internet. It is also noteworthy that a fin fish was found in the sea of ​​New Zealand last April.